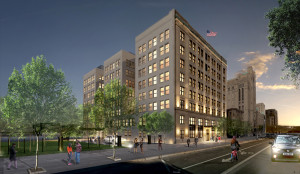 McIntosh Poris Associates is excited to be part of this project as architects of record for the redevelopment of 640 Temple. Previous plans for the Albert Kahn-designed building, which opened in 1920, included more than 100 apartments ranging from 850 to 2,000 square feet plus about 10,000 square feet of retail space in new construction to the west of the 190,000-square-foot building.

“In the sub-basement, we have a 4,000-square-foot live music venue and a lower-level bank vault lounge and then a first-floor restaurant,” he said. “We have some historic, really cool hotel suites that will be on the third floor overlooking Cass Park, and a rooftop pool.”said Christos Moisides, one of the developers on the project.