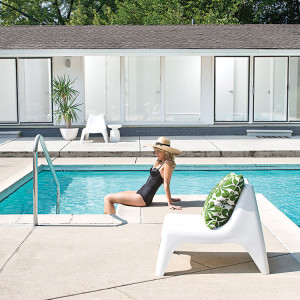 THE BACKSTORY
Not long after moving to the Detroit area, Julia and Richard Slatcher purchased a 1960 home in Beverly Hills. When Julia first saw it, she immediately thought of the house she grew up in in California, which was designed by renowned architect William Wurster (known for his California residential designs using indigenous materials). Because the home — both inside and out — was, according to Julia, “very tired and dated,” the Slatchers hired Birmingham-based architect Michael Poris of McIntosh Poris Associates and Chris Juneau of JunoBuilt in Beverly Hills to do a major renovation. “We wanted it to be very warm and modern … not sterile and cold,” Julia says.

As for the L-shaped pool, the couple (he’s an assistant professor of psychology at Wayne State University and she’s a consultant for nonprofit organizations) kept the existing one as is for the time being. “We didn’t change the pool; we just changed the context of the pool,” Poris says. Before, the windows and doorwalls facing the pool were framed separately so it didn’t read as a continuous window wall, he adds. “It was visually disjointed. By adding trim panels between the doors and windows, we made it more cohesive and it feels more serene.”

HINT OF HOCKNEY
“The pool area is very California and mid-century, which the Slatchers really like,” Poris says. “It’s right out of a David Hockney painting.”

MAKING A SPLASH
“The pool area is the centerpiece of the house,” Julia says, “as it is visible from most of the house through floor-to-ceiling windows and sliding glass doors.”

DAILY DIP
“We (the couple has two children) swim in it almost every single day in the summer,” Julia says. “It is very private, yet it affords a beautiful view of the Rouge River.”

PAINT PATTER
The brick exterior walls that face the pool, formerly a boring yellow-beige, were repainted a rich dark gray color “to help make the home look more contemporary and to help differentiate the brick walls
from the continuous glass and white window wall,” Poris says.

WARMING IT UP
“Michael’s design for our home has a warmth that extends outside, due to the striking Western red cedar overhangs that surround the entire house — including the window wall by the pool,” Julia says.