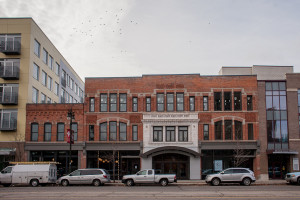 Neither snow, nor rain, nor heat, nor years of pornography managed to destroy the Garden Theater in Midtown. It hung on just long enough to find an investor, reopening in October as Detroit’s latest win in architectural preservation. Built in 1912 as a neighborhood theater, the Garden was an early design of architect of C. Howard Crane, who would go on to create Detroit’s Fox Theater in 1928. By the time restoration began in 2012, the Garden was near collapse.