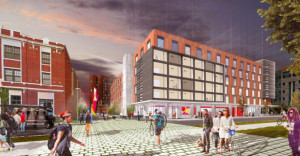 A $32 million development is planned for three-quarters of an acre of Sugar Hill Arts District property that is planned to bring 84 new apartments to the greater downtown market, the city announced Friday morning.

A joint venture between Sonya Mays of Detroit-based Develop Detroit LLC and Rodger Brown of the Preservation of Affordable Housing Inc. is leading the development, of which 25 percent of the units (21 units) are expected to be affordable to people making between 50 percent to 80 percent of the area median income, which is between about $26,000 and $40,000 per year.