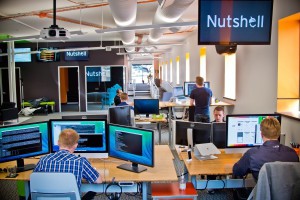 MPA is thrilled about designing COOLHOUSE, an office for Nutshell in Ann Arbor.

“We know if we connect these places, we have the chance to build a solid network,” Malcoun said. “It’s actually a terrible idea to tie up a bunch of our capital in a real estate deal, but we’re doing it because we have to—there’s no billionaire wanting to do cool things in Ann Arbor—and you can’t build great companies without a great community to support them.”

Ufer, for one, is a fan of Coolhouse and all it might do to enrich Ann Arbor’s startup ecosystem. “I think it’s a wonderful project,” he said. “We’re big supporters of their efforts, even though we’re not involved financially. It’s a very neat thing to buy much-needed space that young companies can afford, and where they can scale.”

“It’s very high-end, inspired tech office space,” Malcoun said. “It’s all-inclusive; we’re not renting it out by the square foot. Plus, our tenants will be mixed up with different companies with varying levels of success.”