The East Riverfront area in downtown Detroit to be master planned 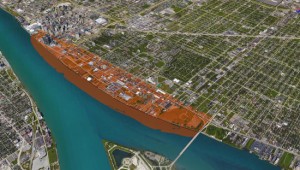 McIntosh Poris Associates is excited to be working with Skidmore Owings & Merrill (SOM) on the transformation of the East Riverfront in downtown Detroit. Early stages of planning will analyze of the area’s current building stock, pedestrian and car circulation, and land use patterns. One of the main early concerns is addressing the link between the city and the river front, a mission championed by the Detroit Riverfront Conservancy for the past decade.

“This project is integrally important to the continued evolution of the Detroit Riverfront,” said William Smith, CFO of the Detroit Riverfront Conservancy in a press release. “And, we’re looking forward to hearing what the community has to say. The community feedback we’ve received in the past helped shape what the riverfront is today. What we learn throughout this process now will shape what the riverfront will become in the future.”