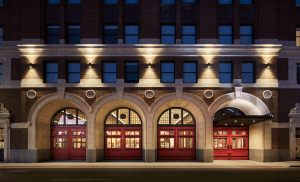 “Detroit is scrappy,” says Poris. “The people are scrappy. They’re tinkerers. And inventors. That’s how Motown and Ford happened here. That spirit—a big part of what’s happening in the city—is what we wanted to keep.”

In 2012, the city of Detroit started exploring ideas on what to do with its old fire department headquarters. Built in 1929, the five-story neoclassical building boasted serious architectural gravitas (the original built in the 1840s, ironically, had burned down) and received a lot of attention. Ultimately, the winning bid went to Aparium Hotel Group with Chicago-based Simeone Deary Design Group and local firm McIntosh Poris Associates to create the Foundation Hotel.