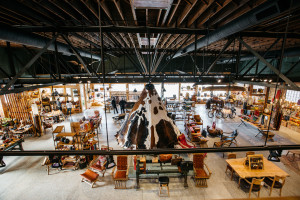 Will Adler, whose company, Will Leather Goods just opened a 9000-square-foot “experience” store in midtown, says he wants the store to help build community in Detroit. As part of that aim, Will Leather Goods will donate 50 thousand backpacks to Detroit Public Schools students over the next two years. The initiative is part of the company’s Give Will program, which will give half a million backpacks to underprivileged children nationwide. Adler, the company’s founder and a native Detroiter, told Curbed that he wants all children to have “a bag to carry their dreams.”

“We want to give 500 thousand backpacks to underprivileged children in America, including 50 thousand in Detroit, so every kid has a quality backpack within the first 24 months we’re open,” he said, adding that he sees the charity program as “Helping the city grow, helping bring people into the city, and supporting our public schools.”